So yesterday I blogged about my ‘hair identity crisis break down’ and today I’ll tell you about what actually went down the day I decided to cut my hair. A horror of sorts.

I decided to cut my hair in early January, I couldn’t take it anymore with the weaves and endless trips to the salon so the lady who’d been styling my hair since I was in high school referred me to the guy who’d cut her own hair. It was very neatly and stylishly cut into an edgy bob by this guy so I trusted her.

I arrived at the salon early in the morning, I showed the stylist a picture of exactly what I wanted and few more similar others. He said “Great! I like clients who know what they want and bring pictures.” Also I’d seen him style a very popular local fashion blogger on Instagram who has stunning enviable short hair so that gave me even more confidence. I sat down in the chair so excited for a fresh new start. I was already feeling myself.

He began, combed my hair out and immediately shaved the sides off. I thought that was a bit odd since he didn’t first kind of do a test run before cutting but I stayed confident that he knew what he was doing. After the quick shaving and trimming he proceeded to relax the hair. The next part is what got me a little confused, he wrapped the hair into thin perm rods, drenched my head in spritz then practically baked it in the hair dryer until it was as hard as grass, like a mini bale of hay on my head. To be exact it looked like a freeze gel version of an s-curl. It did not resemble what I’d shown him. I’m very sure he sprayed half the content of that spritz bottle, some of it had dripped onto my face and dried while in the drier. I had sticky hair spritz on my face and it was starting to burn (mind you the stuff is made of alcohol so it dehydrates). I didn’t even want to look in the mirror because I knew it looked nothing like I’d shown him even though he kept asking me to look at the picture to check he was doing the right thing. This guy was drinking alcohol and dancing to blaring house music while working on my hair. I’m not sure if he was just really confident in his skill or he was drunk! At this point I should have known this was a disaster.

While all of this was going on I was in a panic OH MY GOSH! How am I going to fix this? I had to keep calm even though I was horrified. My solution was to just shave it all if I couldn’t fix it. I managed to calm down and once he was done I went straight home, furious. WHY DO HAIR STYLISTS NEVER EVER FOLLOW INSTRUCTION?! Well the answer to this is because they are not qualified, education wise. Majority of them did not study what they do for a living and we live in a world where people have to use their hands in order to survive, put food on their tables so they say they can do a certain hairstyle in fear of losing money even when they have no clue of how to do it. I mean I have seen hair stylists do some very weird and ‘where is the common sense in this?’ things that are so wrong, like wrapping cheap flaky tissue paper around the head before placing on the cap to sew on a weave! WTF?! That right there is an infection and pure worm fest, highly unhygienic. Sadly some of the jobs people resort to are out of desperation and they aren’t actually good at it. But that’s a topic for another day.

…I went to the bathroom once I got home, flushed my face with cold water to wash off the spritz that was now stinging then I washed my hair … it took a while to completely wash out the product as it had been heat dried to a crust but I managed. After that I blow dried the little bit of hair I had left then I sat in my room in front of the mirror though I was scared to directly look at myself. I had the sides of my head clean shaven off, with very spikey 4 centimetre long hair running down the middle. I looked like a military sergeant. The shape of my head was awkward! My face looked fat and bigger. I sat there for a good ten minutes contemplating shaving what was left all off. I thought to myself “It’s okay, I’ll look fine. It will grow back, in the meantime wear large earrings and go crazy with the makeup girl!” A few moments later I said “No! I wanted a mowhawk and that’s what I’m going to make of this. I whipped out my mini straightener, not knowing how to even go about it I started curling the short hair inward from the back slowly making my way to the front. I applied some edge control for the fly away strands and hair food to nourish my badly dehydrated scalp. After 4 hours of panic I finally had the courage to look in the mirror and I absolutely loved what I’d created. Couldn’t believe I looked so edgy I immediately started taking pics. I didn’t like the spritz and heat styling though, it’s so damaging but I later braved it for a few weeks.

On my first day out, debuting my new look I got some really nice compliments and some equally odd stares. When that happens you feel much better and build up the confidence to rock your do! I felt feisty and fierce! You learn to own your look and realise that people can think what they want but I am not my hair. I mean really, what’s in a hairstyle? The mowhawk was lotsa fun even though it was only for a month. I wish it had been a bit longer but my hair was breaking due to the heat styling and spritz so I had to do a more protective style.

Moral of the story: Everything in life is a risk and whatever the outcome just remember that there’s very few things in life that are permanent. There’s always a way out. Either give it time or PLAN B! In this case I could resort to plan B which was to go completely bald or give my hair time to grow back of which it has.

Share your crazy hair salon styling experiences in the comments section below and also check out  #BlackHairSalon & #BlackHairProblems on Twitter and Instagram the accuracy will have you stitches.

2 thoughts on “Why do hair stylists never EVER follow instruction?” 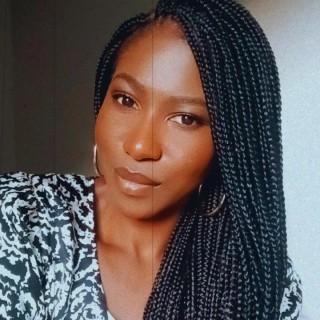